Welcome in the Oase of Peace

On 2nd May 1459, Father Christopher of Milan of the Dominican order was preaching in Taggia. People were very impressed by his eloquence, and decided to have a monastery built. Preachers appeared at the end of fourteenth century with the intention of re-establishing the integrity of morals for which, their promoter Domenico of Guzman, had been fighting (1170-1221).

Father Christopher had chosen Taggia for his preaching, because then this town was an important road junction for the lines of communication with Piedmont (a region situated to the North of Liguria). He had such an immediate agreement with the local authorities, that the town council of Taggia promptly asked the Holy See to give approval to build the monastery.Young Nicolò Calvi (1559- 1623), a Dominican Father from Taggia, wrote about the monastery and its community in his “Annules”.

In front of the monastery there is a large square paved with pebbles; the church façade has been recently restored, thanks to the Monuments and the Arts Office of Genoa. In its interior the church is one large regular hall with four chapels at each side and two votive chapels next to the presbytery. 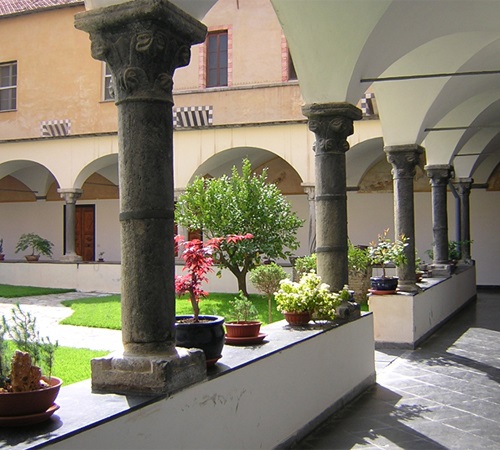 The church has a vaulted roof (the altar vault and three cross vaults, underlined by vaulting-ribs: in the centre of them a sun stands out). The black and white squared decorations had been covered by splendid golden stucco works. The side chapels and the high altar have golden paintings on wooden board or on canvas (the golden sheets were fixed by using a glue made with plaster and egg whites). 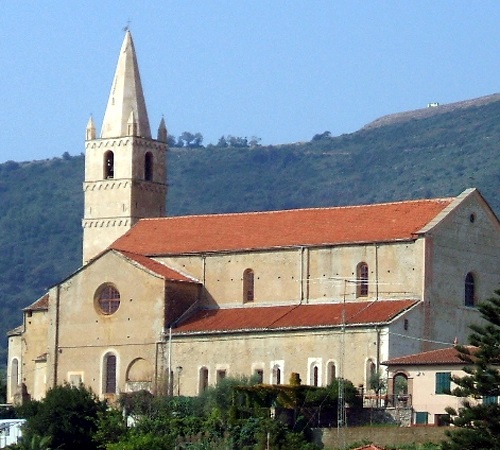 Many paintings are polyptychs, i.e. made up of several boards, and they used to portray the clients usually knelt. The works belong to the Brea family (Francesco, Pietro and Ludovico). The “Crucifixion with St. Dominic” by Giovanni Canavesio is valuable; a particular work is “The Crucified and the Saints”, where the author Emanuele Macario ( a Dominican Father), portrayed himself with a pair of spectacles.